Who is this Carving Fool?

I grew up in Woodville, Ohio, on the banks of the beautiful Portage River.  Growing up in such a picturesque setting, it is probably no surprise that I showed an early interest in art.  My art training came from the Saturday morning art classes at the Toledo Museum of Art and from my art and wood shop teachers in middle school, Mr. Rhiel and Mr. Williams.  As a young artist, I spent hours trying to accurately draw people's faces.  During this time, I also enjoyed drawing real and imaginary species of animals, aircraft, buildings, and other things that interested me.  During my college years at Ohio State, I was called upon from time to time to create artwork for my fellow students.  These were my first commissions, and, as I recall, I was normally paid in beer.  It was during my college years that I started painting using acrylics.  I spent most of my spare time painting pictures, and, as my work improved, I even received some commissions from working adults who paid me in money!

After college, I worked at various writing and editing jobs in Ohio and Illinois.  While I was living in Hinsdale, Illinois, I attended a local arts and crafts show where I saw the works of a woodcarver.  This interested me and, within a few weeks, I had acquired the needed tools and supplies and was creating my own woodcarvings.  My first woodcarvings included birds (don't all woodcarvers make ducks?), but I quickly tired of this and returned to that challenge of accurately rendering the human face, only now in three dimensions.  My first attempts were primitive, but with practice my work improved.  I did my first carvings of football coaches in 1987.  By 1996, I had improved to the point where the Tostitos Fiesta Bowl commissioned me to carve the coaches that met in their bowl game, and I continued to do this for several years.  Over the years, I have won various awards for my carvings including a best-of-show award for my carving of Ohio State Coach John Cooper at the 1997 Sandusky County Fair and Special Merit Awards from the Caricature Carvers of America at the 2008 "Artistry in Wood" show in Dayton, Ohio and at the Woodcarvers' Show and Sale at Sauder Village, Archbold, Ohio, in 2011 and 2018. Of course, I also continue to paint and draw and have won a number of awards for my two-dimensional efforts.

In addition to art, I am also interested in music, especially classical music (Joseph Haydn is my favorite) and jazz.  I have played the piano since I was eight and enjoy arranging my favorite popular songs.  I enjoy regular exercise and gardening, as well as reading Westerns, humorous novels, and history books.   I have been  married for 37 years to the lovely and gracious Pamela (Bender) Hoesman, who is now the director of the Birchard Public Library in Fremont, Ohio.  We have two grown daughters.  Laura teaches German and some other stuff at Norwalk St. Paul School.  Ann lives and works in Tucson, Arizona, and also travels the world, most recently to Columbia and other assorted South American countries. I have trouble keeping up with her. 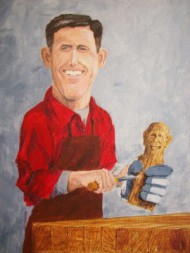 Do you want to know more about my work?

What can I do?

I paint and draw every day.  Check out my better efforts on the "Paintings" and "Drawings" pages.

Check out the "Prices" page to see if I'm having a sale today.